The first stage of The Way of Peace is to keep one’s focus, as far as possible, on the concrete, mundane here-and-now.

Simone Biles, currently the world’s foremost gymnast, withdrew from a number of events in the 2021 Olympics because she lost that focus.

In gymnastics, they call it “the twisties,” and she says sometimes it lasts a couple weeks.  If that happens this time, she may be forced to withdraw from all the events — or risk serious, possibly permanent personal injury.  I’m not privy to all of it, but there’s some public controversy; many people just don’t understand, or don’t care, what she’s facing.  In my book, she’s going to go down as the G.O.A.T. (Greatest Of All Time) regardless.

The twisties involves a disconnect between one’s conscious mind and one’s awareness of one’s body.  For acrobatic gymnasts like Biles, it’s essential during an event to be completely aware of one’s physical body — the place and posture of every single limb and muscle.  When that connection is lost, the athlete may not be able to be aware of where her or his limbs are, or whether he or she is even rightside up or upside down.  This can lead to an imperfect performance, or, worse, injury, as mentioned.

Some people would say that that disconnect is the normal, baseline state of a white man.

When the connection is there, a basketball player is said to be “hot;” he or she will be playing above his or her normal best, with for example exceptionally accurate shooting.  When a football team has the connection, they’re said to have “brought their A game.”  Thus far In the current Olympics, Biles’ A game has not been available to her to bring.  So, the other language comes in:  when the connection is lost, especially in the face of a big event, the team or athlete is said to “choke.”

Whether or not Simone Biles “choked” on this occasion — may be a matter of details we don’t know, or of perspective.  It is possible that awareness of the pressure she’s under, given that these may be her last Olympics, and awareness of the world’s high expectations, distracted her.  But she’s always been a fierce competitor until now.  But if she’s performing far under par in practice, there’s no point in facing the risks involved in competition.

Lately, I’ve got ’em mainly from clicking on New Age-oriented ads on FaceBook; and there have been a ton of them.  I believe in mediumship; I believe in the unseen world.  So, I used to check out some of these ads, in case I might learn from them.  Instead, I find many things beyond belief.

And I ultimately find myself wandering in a cloud of confusion as to what to believe and what not; and feeling wholly disconnected from the world of matter, time and space. 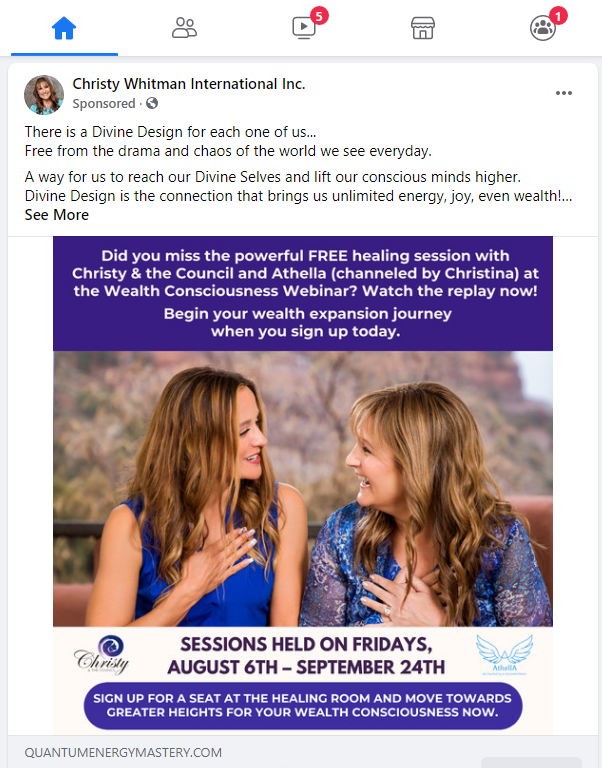 If you don’t think they’re after your money …

They don’t even mention “New Age” any more.  Instead, they talk about “Ascension:”  either individually as highly evolved souls, or as an entire species, we’re about to “ascend” from the third dimension (or density) to the fifth dimension (or density).  (The terms “dimension” and “density” are used interchangeably.)  Now, from the point of view of mathematics and science, one can ascend to a higher plane, perhaps a higher realm, but not a higher dimension.  The ancients never mentioned dimensions; neither did Edgar Cayce or George Ritchie.  All this “dimensions” stuff appears to come from the Ascended Master Teachings.

Any celebrity wannabe need only purport to channel aliens, or angels, or some Egyptian god.  Why no one channels Norse gods, I don’t know.  Toss the word “quantum” in there, and you’ll get a lot more clicks.  (See the images above.)  For extra bonus points, mention chakras.

Why are aliens paying so much attention to us?  Why do they need so many channels?  Hasn’t humanity itself produced enough highly evolved souls, that we need to seek teaching from elsewhere?  And why are they “downloading” (How’s that for a 2021 word?  They actually use it.) such vast amounts of text?  Do we need any longer text than the Bible?

I can be a derelict.

We do not incarnate in matter only in order to escape matter.  There are things we are to do, in this physical world.  We may as well enjoy them; my philosophy is currently becoming, more and more, “Enjoy life.”  And that seems to me to be the way of soul evolution.

Tuesday the 3rd, I took my routine trip downtown, and pondered all these things.  The only things I can be sure of are what I personally see, hear, taste, smell or touch.  On the walk back from checking my mail, to Dunkin’ Donuts and the courthouse, I enjoyed feeling the breeze on my face; enjoyed the physical sensation of walking; said hello to the ginko trees and even the weed trees.  My hips became sore, and I was able to send them happiness.

Sitting on the pavement by the courthouse, with my last iced coffee and last smokes, I admired each person who passed by, including a particular vagrant whom I haven’t seen in years.  A number of them had beautiful auras.

2 thoughts on “The twisties”