Empathy is the ability to see another person’s point of view.

It was the day for my weekly trip downtown, to pick up my prescriptions and check mail.  I would leave my room at the hotel at 12:45, meaning to catch the inbound #73 bus at 1:01.  I would get off that bus at Paca and Baltimore Streets, and then catch an Orange or Purple bus (In Baltimore, some routes have numbers for names, others colors.) to go two miles east, to my pharmacy at Fayette and Wolfe Streets.  I don’t need to tell about the rest of the trip.

I left my room at 12:45.  Twenty feet down the hall, the hall monitor Emanuel was pushing a cart stacked high with hot box lunches an upscale vendor had donated.  He tried to give me one; I generally have no interest in any food beside what they routinely give us, and I had a bus to catch.  I said, “I’m leaving out.”  He pushed one on me and said, “Take it back to your room.”  So I did.  Twenty feet back to my room, and then a twenty foot return trip, and I was non-plussed, but reflected:  From MY frame of reference, he was interfering with my catching the bus.  From HIS frame of reference, he was trying to do me some good.

There wound up being an exceptionally long wait for the elevator.  I pushed the “Down” buttons on both of them; the first one that stopped had a female on board, and male and female guests aren’t allowed to ride an elevator together.  So it was wait, wait, wait.

Normally, I can smoke two cigarettes after I get out the door, before my bus comes.  I lit up at once when I got out the door, but the cigarette was only half smoked before the bus came and I had to throw it down.  From the frame of reference of how many smokes I normally smoke, the bus was quite early.  From another frame of reference, the fact was, the bus was on time, and I was quite late.

I got to Paca and Baltimore.  I don’t know the schedule for the Orange and Purple buses; in the past, I’ve had to wait perhaps twenty minutes.  I lit up a smoke and here at once came this Orange bus; I had to throw the smoke down.  From one frame of reference, it was convenient for me that the bus came at once.  But, as I said, I don’t know the schedule; just a few stops down the line, a different frame of reference appeared, as a whole crowd of people got on.  And at the next stop.  And the next.  From those folks’ frame of reference, this was an earlier-scheduled bus that I normally would not have been able to catch, and it was very far behind schedule.  THEY’D had to WAIT. 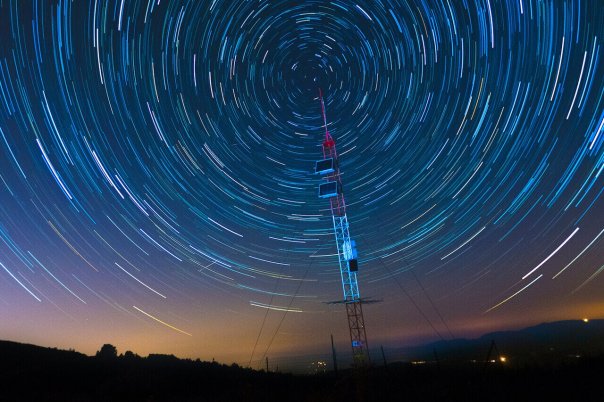 Here is a time exposure of the northern night sky.  The exposure was about an hour.  Through any given day or night, every object in the sky rotates around the North Star, moving clockwise roughly one degree every four minutes.  What actually happens is, instead, that the Earth rotates on its axis one degree in that same time.

But what happens from one day to the next?  From a given time one night to the same time on the next, the Sun and every star move roughly one degree counterclockwise, as the Earth revolves around the Sun.  The stars that appear, say, at “3 o’clock” from the North Star tonight, will rotate to appear at “12 o’clock” from the North Star three months from now, and at “9 o’clock” three months after that.

There is yet a third frame of reference, involving what is called the Ecliptic.

It is hard to conceptualize all three frames of reference at one time.

How does this pertain to the Us vs. Them dynamics of American politics? 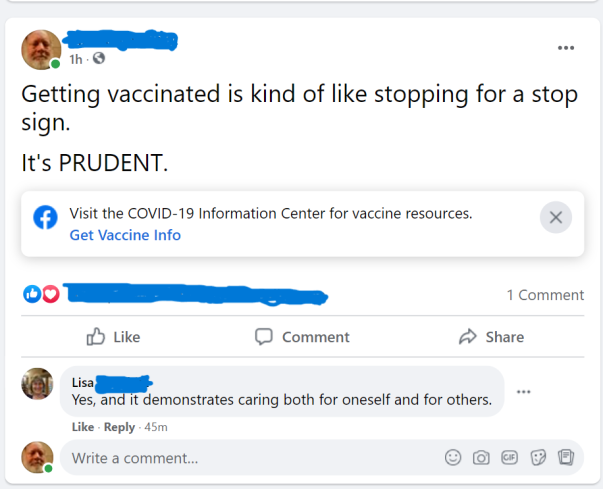 What my Friend Lisa doesn’t understand is, the people in my intended audience don’t care about caring.

She can talk that way, but they’re not going to hear her.

This is taking me in directions I didn’t want to go.

The point then being, casting myself as a liberal, that if I don’t understand these different frames of reference, I’m not going to understand my opponent.

I said at the outset, “Empathy is the ability to see another person’s point of view.”  In common usage, “empathy” is often taken as a synonym for “caring,” but that’s not really what it is.  All the same, it can be said that liberals value empathy more than do conservatives.

I want the ground to be level between the two sides, albeit the portrait I’m painting just now is of very unlevel ground.

The task before me personally is unchanged.  Conservatives are unlikely to understand, or even “hear,” what my Friend Lisa said.  If I want them to hear or understand me, I need in turn to understand where they’re coming from; their perspective, their point of view.  The burden is on me, not them, to do that.