In love with lies.

The current evidence is that nearly half the population is caught up in a web of deceit, and loving it.  We have substantially become a nation who love to lie and believe lies.  Knowingly believe lies.

I don’t presume to understand this, and when this piece is finished I may still not understand it.  And that may be OK.

From “Open heart,” which post otherwise discusses these issues at some length:

If Colin Kaepernick had asked me, I would have told him not to kneel for the anthem, because lots of people were sure to take it wrong.  And sure enough, they did.  They took him as disrespecting the flag and our veterans.  And lots of people hate the NFL now because of it.

Someone wanted to hate them more.  So, this person found a picture of NFL players dancing in the lockerroom, and Photoshopped a burning flag onto it. 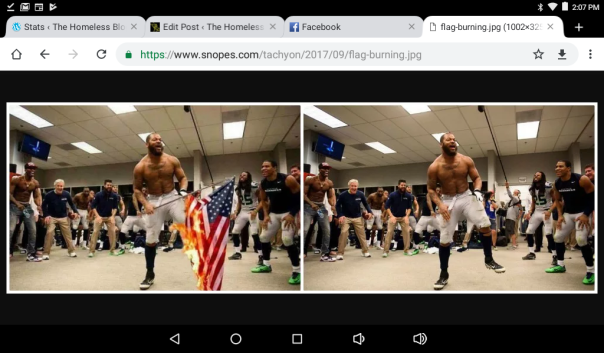 This guy sure got worked up.  Too bad it’s all fake.

He alleged that “the government” (He never says which one.) had driven a couple hundred black and white families out of this area in West Virginia; that it was going to spend $87 million to construct new housing in that place, for a couple hundred Muslim families; that the same had already spawned x number of offspring in this country; and that the whole place was destined to become a “Sharia zone,” where non-Muslims aren’t welcome.

In the summer of 2020, at the conclusion of Donald Trump’s impeachment by the House of Representatives, there was a nationally-televised ceremony in which House Speaker Nancy Pelosi signed the Articles of Impeachment and then, with an entourage, hand-carried them to the Senate chambers.  She signed the documents using, perhaps, twelve pens — a different one for each letter of her name, apparently — which she then handed to bystanders as souvenirs.  This struck me as a classless gesture of celebration in what should have been a scene of utmost gravity.

I haven’t found the image, but someone circulated an image online, afterwards, purporting to show the pens engraved with, “We impeached the motherfucker.”  Now, I’m not up-to-date on all the image-editing capabilities of current software, but a ton of work went into that image — and a ton of malice.

They were actually engraved with her name.

BLM was a big deal in the summer of 2020.  Someone created a fake image of a Kroger receipt, purporting to charge a BLM tax. 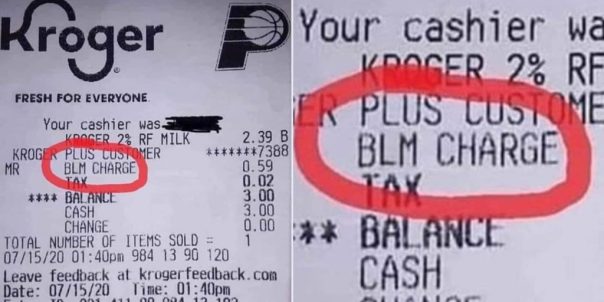 This, again, took some skill — and some malice.

This gentleman is the communications director for the Trump campaign.  When various media entities — not, as far as I know, including the right-wing Washington Times — declared that Joe Biden had won the election; he tweeted an image, purportedly from 2000, analogous to the famous headline, “What Dewey Will Do,” indicating that the declaration was premature. 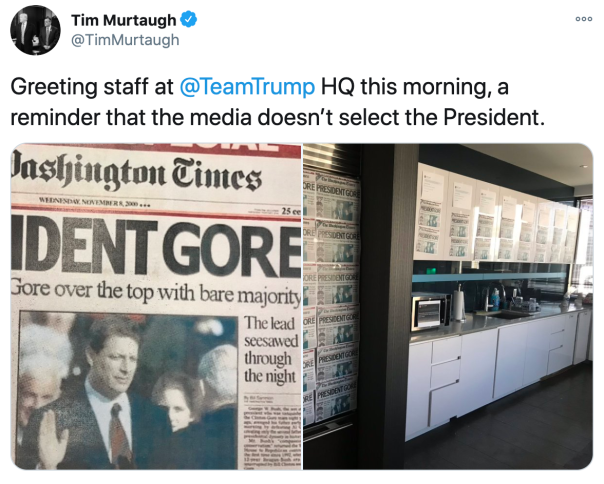 This alleges the Washington Times prematurely and mistakenly called the 2000 Presidential election for Al Gore.  The fact is, this newspaper never published any such headline.

To produce the image on the left, not to mention the one on the right — the paper’s newsroom, with the same headline plastered all over the windows — again, took some work, not to mention some — What’s that word I used?

I’ve saved the worst for last.  Report: Fact check: Joe Biden did not promise violence if he loses election (usatoday.com)

The spring and summer of 2020 were full of unrest and violence behind the police-related deaths of George Floyd, Breonna Taylor and Rayshard Brooks, and the police shooting of Jacob Blake.  There was also ongoing hooliganism in Portland, Oregon.

On August 31, Presidential candidate Joe Biden spoke to this.  My quotations are from the article linked to above.

“Do I look like a radical socialist with a soft spot for rioters?” Biden asked. “I want a safe America, safe from COVID, safe from crime and looting, safe from radically motivated violence, safe from bad cops.”

“Violence will not bring change, it will only bring destruction. It’s wrong in every way. It divides instead of unites, destroys businesses, only hurts the working families that serve the community. It makes things worse across the board, not better,” Biden said.

In response, one Larry Launer posted this:

What would motivate Larry Launer to post that Biden said the exact opposite of what he actually did say?

Actually, it does get worse.  Much worse.

Sometime between May and June of 2016, in the midst of the then-Presidential primaries, someone hacked the computer servers (plural) of the Democratic National Committee (DNC).  Weeks later, that person leaked tens of thousands of e-mails to WikiLeaks.  The DNC hired the cybersecurity firm CrowdStrike to investigate.  U.S. intelligence agencies concluded that it was the work of Russian military intelligence.

In November 2019, in her testimony to the House impeachment inquiry, Fiona Hill admonished Republican Congress members for promoting a counter-narrative that she said had its roots in Russian propaganda.  That narrative held:

The White House said Rudy Giuliani, Donald Trump’s personal lawyer, had made a number of trips to Ukraine to investigate this matter, though his only source was a known Russian agent, Andriy Derkach.

It caused me no small discomfort that Trump’s inner circle would not just believe, but even invest resources in, such a preposterous story.  There was delusion at work at the highest levels of the Executive Branch.

As of this writing, 12/12/20, I remain dissatisfied with my understanding, and have no clue where to turn.  Things may or may not change before this post’s scheduled publication date of 12/26/20.  Or, some things I say here may yet overlap with things to be said in later posts.

I go to great lengths to presume everyone is honest at all times, and likewise to avoid ascribing malice to anyone.  This has only become the more so since the podcast, “Three Wise Monkeys.”  So the writing of this piece has been especially hard for me.

I have also strongly sought, here, to be non-partisan, notwithstanding the final story about Donald Trump.  All these stories happen to date from during Trump’s Presidency, and it is also true that, whoever one puts on a pedestal — and it’s indisputable that many Americans have put Trump on a pedestal — one is prone to imitate.

The most I seem able to understand at the moment, corresponds well to things I have said before, and I’m not willing to just rehash, re-state or quote them here now.  In “Open heart,” I said:

Whether we realize it or not, we choose our feelings first, and then look for reasons or excuses to say those feelings are correct.  If a person wants to hate, and there is no handy excuse in the facts as they are, he or she will make up an excuse.

This is examined in detail in another forgotten post from just two weeks prior, The Bogeyman; and I urge the reader to visit that.

5 thoughts on “We are a diseased nation.”