“‘This isn’t about knitting. This is resocialization,’ said [Lynn] Zwerling, who created the program.”

I’m skeptical about the un-manliness of knitting, but impressed with the strict rules, e.g. about language, and the teaching of various features of emotional intelligence. 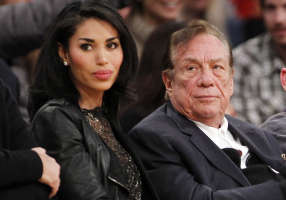 Neanderthals ‘as clever as modern humans’

“Neanderthals lost the human race but were no less intelligent than the early modern humans who replaced them, according to archaeological research that bucks stereotypes of slope-browed dimwits.”

I’m posting this mainly as a matter of giving credit where credit is due. We know from other sources that, for example, there is no discernible difference between the tools found at Neanderthal and at early modern human sites; and that Neanderthal society was sufficiently advanced that they put flowers in their loved ones’ graves.

The article speculates that they may have disappeared primarily through assimilation (that is, intermarriage) with the early modern humans. Significant Neanderthal DNA continues to appear throughout the modern human genome.

Let me not cite Donald Sterling as an example.

Calling All Dogs: Can You Hear Me Now?

“A woman stands in the middle of a park calling her dog. The dog, oblivious, continues to play with his friends. The woman calls out again, this time more loudly. No response. Finally, in a fit of frustration, she screams at the dog, grabs his collar, and drags him away. What’s happened here? Did the dog really not hear his owner calling?”

Certainly this is the most frustrating scenario I’ve dealt with as a dog owner. The author confirms what I’ve long suspected: “Never yell at your dog once he’s come to you; he did what you asked.”

At the moment I am writing this, I want to make certain connections for reasons I can’t as yet articulate. The easier connection is to the need to keep promises, as indicated in the post “A MUST-READ CONCERNING JUSTICE AND POVERTY.” A second is to the need to continuously maintain positive affect (emotions), as may be mentioned in current posts tagged “Emmet Fox.”

I had wondered for a long time how the “separatists” could be so well organized without our having any knowledge of who was orchestrating it. Turns out we have intercepted those communications.

I’m not sure exactly what the May 25 elections are intended to accomplish, nor what basis they may have in Ukrainian constitutional law. Nor am I aware of any indication that the Kremlin intends to recognize them. Adding to the frustration and confusion is the fact that, per the next article linked to here below, the separatists have their own “election” scheduled for May 11.

Here is a first-class propaganda war, in progress, making truth very difficult to find. I like the remark of the French U.N. ambassador, Gérard Araud — “A pyromaniac fireman situation is what we have here.” — if only the prospect of a major war weren’t at stake.

“The trouble began Friday when a pro-Ukrainian rally in the city attended by thousands of soccer fans was attacked by pro-Russian separatists carrying sticks, shields and, in some cases, guns. … Later that evening, a pro-Ukrainian mob attacked people in a pro-Russian encampment, sending them running into a nearby building that the crowd then set on fire with gasoline bombs.”

Another source has identified the building as “the trade union building.”

Although there is now misconduct on both sides (See quotation of 2014-05-04.), Russia still appears to me to be the villain.

What is the legitimacy of this referendum?

The headline may be misleading in that there’s misconduct on both sides. However, the pro-Russian forces still seem to be the badder guys.

“‘The idea that information has value is clear to both sides,’ said Anna Neistat of Human Rights Watch. ‘On both sides, the effort to prevent objective journalism has been quite obvious. When you are fighting a PR war, the people who are reporting the truth are your first targets.'”

Truth is the first victim of polemics.

What to Do When Russia Invades Your Land

The history of the 2008 war between Russia and Georgia suggests that many of the “pro-Russian” separatists may, in fact, be Russian special operations forces.

Putin asked the separatists to cancel the May 11 referendum. I strongly suspect he’s saying one thing in public and the exact opposite in private.

For one young Ukrainian, the Maidan dreams of democracy are dying

“About 35 percent of eastern Ukrainians and 26 percent of southerners favor more local-government autonomy, according to a poll carried out in mid-April under the auspices of the International Republican Institute, a U.S. nonprofit organization that promotes democracy by helping to develop political and civic institutions. But the poll found little support for a division of Ukraine: only 5 percent in the east and 2 percent in the south.”

I’m not real confident in the legitimacy of the change of government that followed the Maidan demonstrations, either. The young man interviewed here emphasizes concerns with the corruption prevalent under the previous regime.

Pro-Russian separatists will proceed with vote despite Putin’s plea

On the one hand, the separatists may not have necessary logistics to pull off the referendum with any semblance of credibility.

On another hand, according to this report there is little popular support for Russian annexation of the separatist regions. One must always be skeptical of reporters’ own judgments.

On a third hand, one analyst speculates, as I do, that Putin may be playing both sides of the question.

Eastern Ukrainians vote for self-rule in referendum opposed by West

“[W]hether residents were seeking to join Russia was unclear. The ballots asked voters whether they supported what could be translated variously as ‘independence,’ ‘sovereignty’ or ‘self-determination’ for the Donetsk and Luhansk regions.”

“Many observers say the referendum lacks any credibility. Names were checked against a 2012 voters’ list, but anyone who turned up with a passport was allowed to vote, even if they weren’t on the list. Indeed, in one polling station in the city of Mariupol, many people brought multiple passports on behalf of relatives and openly filled out two, three or even four ballot slips themselves.

“The ballots lacked markings that could prevent them from being widely copied. The people staffing the polling stations and counting the ballots were activists who supported a yes vote. There were no international oversight missions.”

Separatists claim victory, call for Russia to annex a part of eastern Ukraine

Could the results have possibly been otherwise? Or Russia’s response? Note, however, that as per the previous article, a call for annexation doesn’t correspond to how the question was worded.

Don’t bother clicking that link. There are only two new details here, and I’m including this only in case either one of them becomes significant later.

(1) Tuesday “there was renewed fighting in eastern Ukraine, where pro-Russian rebels killed seven Ukrainian troops and wounded eight others in an ambush outside the city of Kramatorsk.”

(2) The Kiev government is refusing to meet with the separatists, who it says “have blood on their hands.”

Apparently the billionaire steel magnate is paying thousands of his workers to patrol the streets unarmed.

Recalls a couple other questions, which may be more likely to occur to me than to other folks because of my financial situation. All those “green men” in uniforms without insignia, who are occupying all the various government building: who’s keeping food on the table for their families? Who’s paying their rent? An awful lot of people aren’t showing up at their jobs.

By the same token, a week or so ago there was news video of this fellow in such a uniform, walking up stairs carrying a riot shield in one hand and a Russian flag on a two-inch diameter wooden flagpole, in the other. All these Russian flags appearing everywhere: who bought them?

Background on the billionaire.

Gives some background on the “green men” and their alleged Russian leadership. However, MSNBC displays quite a bias: the banner on the web page reads, “Ongoing coverage of the escalating confrontation between Russia and the West over Russia’s aggression in Ukraine.”