The real secret:  There aren’t any.

Christmas day, when I sat down in the shower line at the shelter where I stay, Comet was showing the last 15 minutes or so of a movie.  The din in the room normally precludes hearing any dialogue, but a momentary dip allowed me to hear this:  one man told another on the phone, “The missing gospel has been found.”

There followed a long sequence of a woman writhing and screaming on a bed, while blood flowed from her hands, feet and scalp.  This was interspersed with black-and-white scenes of Jesus’ crucifixion.  The bedroom was engulfed in flames.

The next scene was of a man digging in the floor of a church while a nearby statue of the Virgin wept blood.

The movie concluded with three stills of white text on a black background.

The first still read to this effect:

In 1945, near Nag Hammadi, Egypt, a scroll was found buried in the sand.  It began with the words, “These are the secret teachings of Jesus Christ.”

The scroll can say whatever it likes.

The second still read to this effect:

Known as “The Gospel of Thomas,” scholars the world over have agreed that this scroll contains the closest thing we have to the actual words of the historical Jesus.

It’s highly debatable that there’s any such consensus.

The third still read to this effect:

Even so, the Vatican refuses to recognize this text, and has gone so far as to call it heresy.

The Vatican is free to choose what it does and does not believe.

No horror movie will persuade me about the Gospel of Thomas.

The Gospel of Thomas has nothing to do with possession, exorcisms, stigmata or statues that weep blood.

I found a web page about the movie and the text.  It offers this:

The basic perspective of Thomas is that the Kingdom of God is on earth. It is all around us and within each of us. The Divine light that is ‘God’ is inside every human being and it has no predominant gender of either male or female. God is alive and living here on earth, within and without, above and below.

That sounds a lot like what I myself believe; only, I didn’t need any secret text to tell me.  I merely sought to follow the words attributed to Jesus in Matthew, Mark and Luke.

The web page goes on:

[The Gospel of Thomas] is not recognized by the church.  If it were, there would be no more organized religion.  No more control, lies and manipulation.  Instead there would be truth and a new way of living.

There follows a good deal of antipathy toward the Bible as it is, and toward the church.  Now, it’s one thing to state thus-and-so; it’s another thing to live that way.  As to “the Kingdom of God is within you,” as soon as you get into a hostile dispute about doctrine, you’re no longer living that way.

I do not ascribe authority to any text.  I recognize no authority but What Is.

The fact that any text says thus-and-so, does not make it so.

Even if it’s old.

Even if it was hidden, or secret, or suppressed.

Even if it claims a famous author. 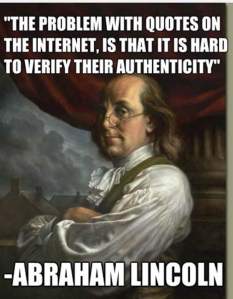 Even if it challenges someone else’s orthodoxy (in this case, that of the Roman Catholic Church).

I follow what is sometimes called “experimental religion.”  If I live by my interpretation of a given Bible passage, and find that living that way is prone to bring healthier relationships and greater practical success, then that interpretation begins to become authoritative in my life.  I know no other way.

What will you do with the Bible we’ve got?

Dozens of old, old books that claimed to have been written by famous people, got considered for inclusion in the New Testament, and were left out.  Some of my neighbors, and others, are zealous to find out what those “lost books” say, as if the church had no right to choose.

The search for “secret teachings,” Bible codes, and so forth, can be an easy way to avoid dealing with the demands placed on any reader by the plain, public language of the Bible we do have.

And the text does place demands on any reader who will take it seriously.

For example, it calls on me to love my enemies.  To forgive and be forgiven.

Are you willing to live that way, or not?

My testimony:  It’s worth the effort.

Related:  About the “lost books of the Bible”
Related: “The Dead Sea Scrolls and the New Testament.”  I don’t necessarily hold to the author’s religion, but his analysis of the scrolls’ origin and content and the controversies surrounding them is very good.