Here’s a new word:  Equanimity.
I can’t even pronounce it.

A FaceBook post of October 29, 2018 by one Ray Lozada began getting lots of comments about a month ago, and somehow came into my news feed on August 21, 2021.

The man in the lower picture is Lavoy Finicum, who has his own story.

The top quote is something Obama never said.  He said instead, “An attack on one faith is an attack on all faiths.”  Link:  Obama visits a mosque to send pointed message to non-Muslims (02/13/16).

The comments on the post included a ton of anti-Obama hate speech: 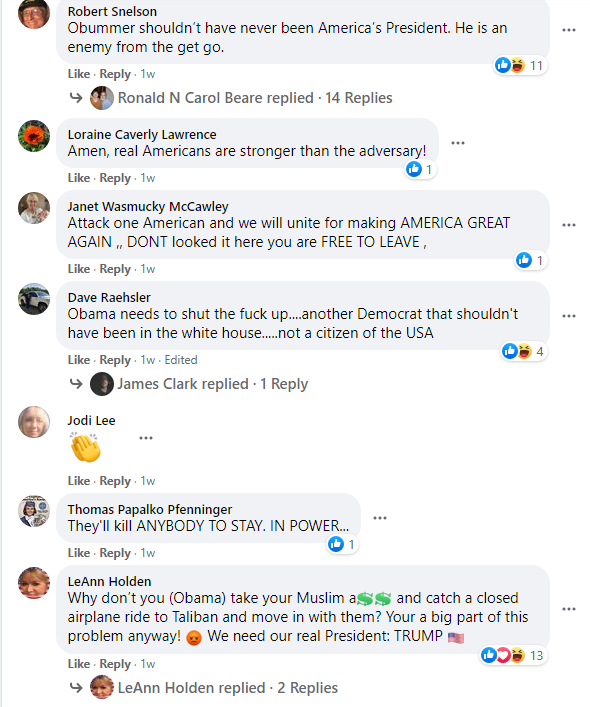 In fairness, there was a nearly equal amount of anti-Trump hate speech.

My response was not what I expected.

I would have anticipated a response similar to that reported in the post, “Shock.”  In contrast, in the event, Ray Lozada’s post did not upset me in the least.  Either I was exceptionally centered that day — I’ve said before, “When I am centered, … it seems impossible for any thing to upset me or disturb me.” — or I have somehow transitioned into a whole different way of being.

The hate-speakers are who and what they are.  They live in a fundamentally different world than I do.  Nothing I can do or say can change them; nothing I can think of, to do or say, is likely to influence them.  So, I may be best off to simply accept that those things are so.  I can be angry at them; I can be indignant; but those emotions will accomplish nothing.

Hate speech is emotional poop.  Now, I’ve lived before where the physical squalor is such that people leave their poop pretty much anywhere.  (Link 1.)  (Link 2.)  I’ve dealt with the poop on the stoop at Dunkin’ Donuts; I’ve dealt with the poop on the shower bench at the shelter.  Related is the fact of the places I appear to still be unwilling to go — in Baltimore, the Lexington Market and also Penn-North — because the spiritual darkness there is so intense.

Hate-speakers live in a world of squalor, too; they live in deep darkness.

Albeit they are normally, in fact, averse to poop.

I have supposed before that when I become ideally centered, squalor won’t faze me.  Maybe I am, to some extent, there now.

I have avoided writing this post every day for some time, now.  That suggests that it reports a spiritual advance that I’m not yet fully ready to embrace.