Has the proverb lost its meaning?

I just applied for a job at a radio station.  I’m concerned that the only clothes I have may not be fitting for an interview.  At the shelter where I stayed for my first nine years homeless, we had all kinds of nice clothes available every day.  That’s not my situation now.

Candidly, the clothes I have on at this moment, um, are the same ones I’ve worn for the past six weeks.

What I do have now that I didn’t have before is a closet.

But I don’t know how long I’ll have that, and I don’t know how soon I may return to having to carry all my worldly belongings with me all day long — in which case, it’s best to have as little as possible to carry.

Even BOGO deals on vitamins do me no good, because the second one is just more to carry.

So.  I’m a-get decent clothes, and for now keep them in the closet when not wearing.  Whenever it comes that I have to give up the closet, or the clothes — I’ll cross that bridge when I come to it.

The proverb’s origin pertains to something more scary than clothes.

The story is that a company of infantrymen were marching through the jungle.  They knew that sometime in the near future, perhaps six hours, perhaps a day, they would come to a vast gorge, with a shaky bridge across it, and they would have to cross that bridge.  It would swing as they walked, and they’d have to stagger their steps to keep it from swinging wildly; slats might be missing in some places, and the cables weak and worn.  And many of the men were anxious about it already.

I don’t know what she’s smiling about. 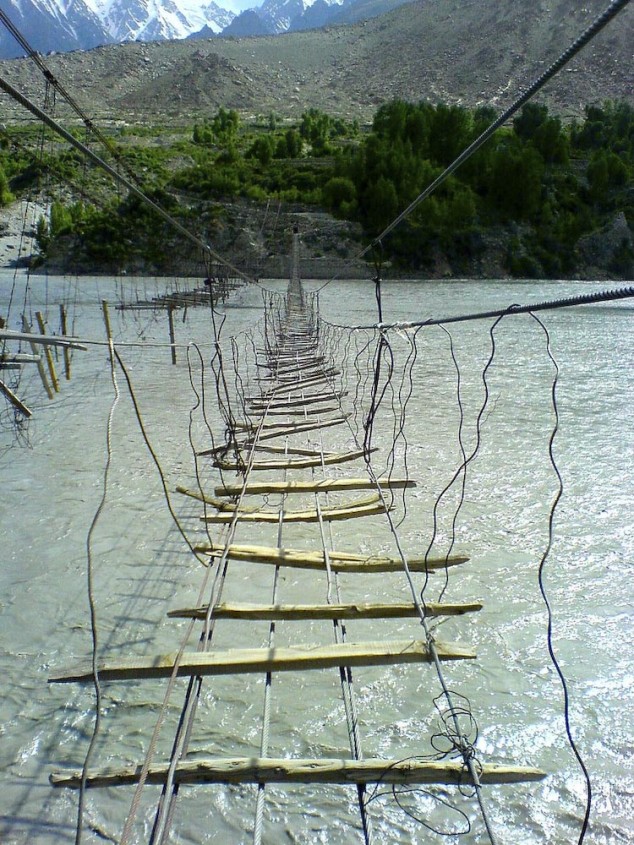 The commander answered, “We’ll cross that bridge when we come to it.”

The hard task is in the future; there’s no point in stressing over it now.  Anxiety about the future is debilitating now.

So, as I’ve said elsewhere, it’s best to keep one’s focus on what

do, here and now.

THE WHOLE TEACHING
No past, no future.
Open heart, open mind.
Complete attention, no reservations.
That is all.