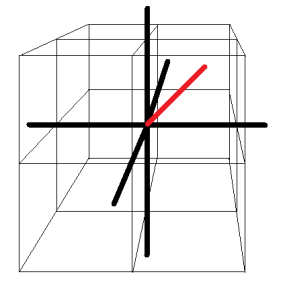 A vector in a three-dimensional space.

I envision the emotional or spiritual world as a ten-dimensional space, in which a vector (arrow) beginning at the origin (the center of the space) depicts a person’s emotional state at any point in time.  The vector’s length indicates the intensity of one’s emotions at a given moment, while its direction indicates what kinds of feelings those are — equal parts joy and sadness, for example, or some anger and much love.

These are the energies one is emanating at that moment, the kinds of light or darkness one creates.

Given free will, each of us is completely free to change the vector’s length or direction however one may choose.  Completely free.  One meets no resistance in moving in any direction.  No cosmic “STOP” sign or practical difficulty appears to warn one against straying into dark regions.

Normally, most people spend most of their time in the brighter regions.  Doing so presents many practical advantages, even evolutionary (Darwinian) ones.  It is on the basis of most folk acting this way most of the time, that humanity has achieved what it has.

(Related, as to the evolutionary advantages of altruism:
Rat empathy— previous post here
If It Feels Good to Be Good, It Might Be Only Natural — Washington Post article
Human fronto–mesolimbic networks guide decisions about charitable donation — the original research described in the Post article.)

Each of us does wander into darkness from time to time.  Even Jesus lost his temper.  A small portion of the population, however, practically live there.

From “The dark side of EQ:”

Paul Bloom and others conducted an important experiment at Yale; the following quotation is from Katie R. Billings’ report, Is Altruism Innate?

“In the first experiment, infants between the ages of six and ten months watched a series of puppet shows. Each puppet had a unique shape and color for the infants to easily distinguish. The first puppet, a red ball, struggled to climb a hill. On several occasions, the red ball was pushed up the hill by a yellow triangle. On other occasions, the red ball was pushed back down the hill, during its struggle, by a blue square. After watching the puppet show at least six times, the infants selected their favorite puppet, either the yellow triangle or the blue square. Over 80 percent of the infants chose the ‘helpful’ puppet, a surprisingly high, statistically significant percentage.”

I am glad that Billings reports how many of the infants acted this way; that detail was left out of previous reports I’ve read.  I wonder about the 20%.  Could their conduct now suggest a certain karmic predisposition, and perhaps warn of possible problems to come?

The social effects of habitual creation of darkness, even by (normally) a small part of the population, are disastrous.

On the one hand, given our complete freedom to go wherever we choose in that space, it is inevitable that some folk — again, normally a small percentage — will happen to become fascinated with the dark regions.

Some people love to hate.

All of us are susceptible to become this way.

Look at the current state of political discourse in this country.

On the other hand, if habitual creation of darkness is the principal cause of poverty, then poverty can never be eliminated on any complete or permanent basis.

Evangelism is a matter of coaxing the arrow into the light.

We can evangelize ourselves.

By the path of presence, one can become increasingly aware of one’s ability to choose one’s feelings, and thus able to exercise that choice.

I believe this is what Jesus really taught.